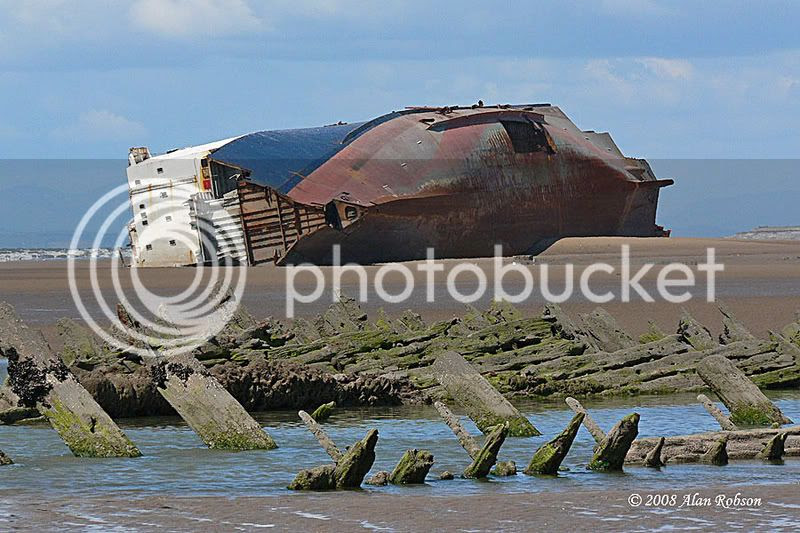 Riverdance: I feel this shot of her is especially touching. The half-dismembered Riverdance a backdrop to, “…a Norwegian 3-masted barque called the "Abana", that was wrecked in 1894 on its way from Liverpool to Florida.” All photographs of the Riverdance are used by permission of the photographer and copyright Alan Robson, 2008.

Alan Robson, with the same last name as my paternal grandmother, lives just off Blackpool Beach where the Riverdance lies today. With his camera in hand, he has regularly visited the ship to capture this ongoing saga with a viewpoint all his own.

Cargo Law tells us that the Riverdance… “departed Warrenpoint, Northern Ireland,…Jan. 31, laden with 52 trailers, one truck and one private car. …(I)n the early evening, M/V Riverdance was struck by a freak wave. (The) vehicles on the main deck shifted, producing a list that, at one point, exceeded 60 degrees.”

She touched ground at low tide, and the Coast Guard removed the crew and passengers that night. The next day the crew began readying the Riverdance for refloating. Instead of floating, she turned broadside to the beach. Smit of Rotterdam was hired to refloat her, Severe weather conditions reduced her stability, and in late March, Cargo Law writes that, “78 knot winds… resulted in heavy damage and a 100 degree list.” She began sinking into the sand.

By March 21st, the Riverdance was declared a constructive total loss. On April 10th, the owner declared that a local company won the bid, and the Riverdance would be taken apart on the beach in approximately 10 to 14 weeks.

I have found Alan’s photographs poignant and powerful. If I could be there hovering with my camera in hand, I would. We are lucky to have Alan to record these images. Thank you Alan.
at June 18, 2008

WHAT WAS YOUR FIRST CAR?

Mine was my grandfather’s last car, a 1957 Chevy.   I was stationed at Ft. Eustis, Virginia when my mother called to tell me that she wa... 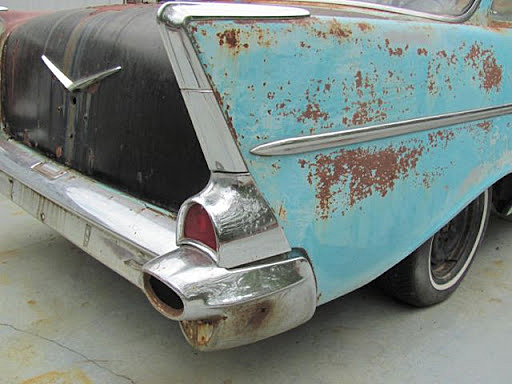